Within the park’s mythical Mura (fire) realm, the attraction features a park-based storyline, centering around the great god of fire – Volkanu - who lives deep inside the volcano at Lost Island.  The experience takes riders on a thrill-packed adventure to locate the sacred Ora-Tika statue, responsible for keeping Volkanu dormant, and return it to the altar to restore peace to the island.

“This is a wonderful recognition and a superb testament to the creativity and determination of all who have worked so hard to make VOLKANU and the Lost Island Themepark a success!”


About Volkanu – Quest for the Golden Idol: This interactive dark ride is housed inside the park’s large, iconic Volcano structure, serving as a beacon to the Mura Realm at Lost Island. Once aboard, riders will experience over five minutes of showtime chock-full of interactive gameplay, 3D media, breathtaking scenery, animatronic figures, and immersive special effects.

The Story: Designed to create a seamless experience with the park’s mythical island theme, the ride is inspired by the great god of fire Volkanu - a legendary bestial being of molten rock living deep inside Lost Island. The experience takes riders on a thrill-packed adventure to locate the sacred Ora-Tika statue, responsible for keeping Volkanu dormant and return it to the altar to restore peace to the island.

Project Scope: Sally Dark Rides turnkeyed the attraction, managing the story, ride design, fabrication, and installation, which were accomplished on time for the season opener in June 2022.

Recognized as the worldwide leader for turnkey dark rides, Sally specializes in building destination-quality attractions for regional parks around the world.  Founded in 1977, Sally Dark Rides began as an animatronic production company. Since then, Sally has evolved into the lead designer and manufacturer of the most successful dark rides around the world. Sally’s services include custom design, special effects, animatronics, and scenic fabrication, media integration, control systems, project management, and installation. www.sallydarkrides.com

Started in 1998, the Golden Ticket Awards were established by Amusement Today to shine a spotlight on the amusement park industry and attractions by recognizing the “Best of the Best.” Today, they are among the most sought-after awards among theme parks, amusement parks, family entertainment centers and water parks. The Golden Ticket Awards are the direct result of votes cast from around the globe. More than 500 experienced travelers, divided equally among the nation as well as internationally, receive ballots. 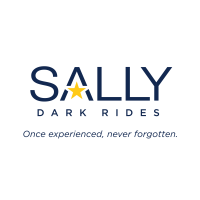