MIDDLEBURY, Conn. – Step right up and see the magic and comedy show this season at Quassy Amusement & Waterpark’s Carousel Theatre here.
“We’ll be doing a new show with a circus theme this year,” Jim Sisti, the park’s resident magician revealed as he and his wife, Sandy, were preparing the production to mark their 18th consecutive season at the lakeside property.
The Beacon Falls, Conn., couple are digging deep into their bag of tricks to present an innovative five-act show when Quassy opens on Saturday, April 25.
As in the past, the Magic & Comedy of Jim & Sandy Sisti will incorporate audience participation.
“It’s always been vital to use children in the show,” Jim pointed out, as the entertainment duo brings youngsters onstage to assist with a number of routines.
Without letting – in this case – the rabbit out of the hat, Jim said the circus theme will allow the use of some colorful props, including what he calls a “flash production” at the beginning of the show, which sets the audience up.
“We’ll be using a palanquin illusion, which is pretty spectacular, as the opening act,” the veteran magician added.
Mixed in will be an audience participation piece, a vanishing elephant act, and a grand finale titled the Mismade Lady Illusion.
The Magic & Comedy of Jim & Sandy Sisti will be staged weekend afternoons during the early part of Quassy’s season. The magic show will not be presented on selected dates when special events occupy the stage. During the height of the summer season the Sistis will perform afternoon shows Tuesday through Sunday with additional evening performances on Friday and Saturday. No performances are slated for Mondays.
‘3-D’ Fireworks Return
Quassy popular “3-D” Fireworks return on July 4 with special viewing glasses sold to benefit Give Kids The World Village in Kissimmee, Fla. The 10:15 p.m. fireworks shoot will be over Lake Quassapaug from barges located off Quassy Beach.
Presenting partners in the community service event are Price Chopper supermarkets, TD Bank, Shaker Auto Group, Pepsi, and Prime Publishers.
Give Kids The World Village (GKTW) is an 84-acre, nonprofit "storybook" resort in Central Florida where children with critical illnesses and their families are treated to weeklong, cost-free vacations.
“We have long supported Give Kids The World and their incredible initiative, so this year the park decided to make them the beneficiary of our fireworks show,” Quassy President Eric Anderson noted. In 2019 Quassy hosted a Coasting For Kids event which raised more $5,500 for the GKTW.
Yacht Rock Party
Another highlight of the summer season will be a “Yacht Rock” Quassy After Dark Beach Party on Friday, July 31, featuring the sounds of Connecticut band Anchor Management.
From the mid 1970s to the mid '80s, popular music had a definitive sound. Memorable lyrics, smooth harmonies, and pure musicianship dominated the airwaves with artists like Christopher Cross, Boz Skaggs, Hall and Oates, and Michael McDonald - to name a few. This infectious, smooth sound has now become known as Yacht Rock.
Anchor Management’s evening show will include costumes, prize giveaways and sing-alongs with music from that genre. Information about the ticketed event is available on the park website and through Quassy’s e-news.
Following is Quassy’s 2020 special events listing:

Note: Events, park operating hours subject to change without notice.
About Quassy
Quassy Amusement Park & Waterpark is in its 112th year and features more than two dozen rides and attractions.
Rides include the award-winning Wooden Warrior roller coaster, Reverse Time, Frantic, Music Fest, Yo-Yo super swings, Free Fall ‘N’ Drop Tower and Grand Carousel. New for 2020 is the thrill ride Tidal Wave, a giant swinging ship.
Splash Away Bay waterpark has dozens of ways to get drenched on warm summer days, including 15 slides, Saturation Station modular play area and a splash pad for toddlers.
Quassy also features a laser maze attraction in its huge arcade building.
The park also has a restaurant, redemption arcade, games, live entertainment and special events.
Season passes are on sale now at the park office and through the Quassy website at www.quassy.com. Company picnics, school fieldtrips and other catered events are also being scheduled through the park office at (203) 758-2913.
Quassy is located at 2132 Middlebury Road, Route 64, in Middlebury, Conn., on the shores of Lake Quassapaug.
--30—
With photos and park logo

Bringing In A New Show

Jim and Sandy Sisti are returning to Quassy’s Carousel Theatre stage for the 18th consecutive season. Their new magic and comedy show will have a circus theme. (Quassy photo)
-------
Yacht Rock Party Rockers

Anchor Management will rock at Quassy Beach on July 31 when the Connecticut band presents a “yacht rock” party. (submitted photo) 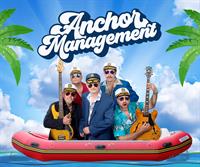